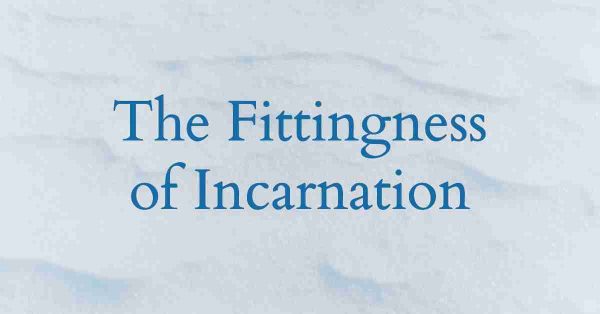 Is The Incarnation Unfitting?

In 1 Timothy 1:17, God is described as “the King eternal, immortal, invisible, the only wise God, [to Him] be honour and glory for ever and ever.”

From Genesis to Malachi, we are told many things about God. God is a spirit. God is the uncreated Creator. God is glorious, He is high and lifted up, none compares to Him who is above all. And if we were to stop there in our knowledge of God, we would certainly have a God worthy of all our worship. A God that is utterly transcendent, totally beyond us, incomprehensible and divine. From this perspective, we might say that it would be unfitting for that God to become man. Just as it is unfitting for a king to do his servant’s chores, scrubbing the floor of his own palace, it would be incongruous, improper, unfitting for God, being beyond being, to take on the likeness of human frailty. Men stink. Men sin. Men die. What could be farther from godlikeness than that?

It is not uncommon for believers of other religions, be it Muslims or pagans or philosophers, to mock the idea of God dying for sinners. As Paul says in 1 Corinthians 1:23, “We preach Christ crucified, unto the Jews a stumblingblock, and unto the Greeks foolishness.”

The stumblingblock and foolishness of the gospel, is that God became man and died for sinners. This stumbles Jews who rightly believed that God is a spirit and invisible. This looks like foolishness to Greeks who believed in malicious gods that were just as unreliable and changeable as men. Certainly, it would be incongruous, improper, unfitting for the eternal God to become man.

But is it really? Is the central doctrine of our faith a contradiction in terms.

In answer to this question, the greatest theologians in church history argued what I will argue now: