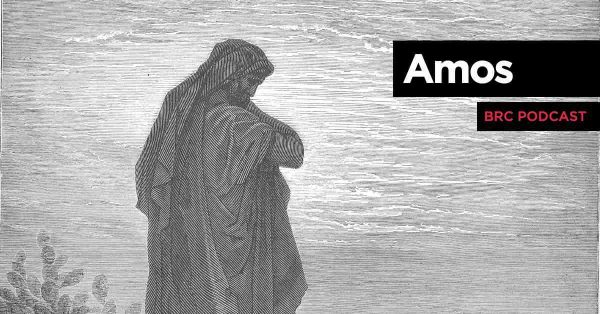 The book of Amos is the third of the twelve minor prophets and in it Amos (whose name means bearer or burdened) describes the coming judgement of God upon Israel and the surrounding nations. We are told in the first verse that this is what Amos “saw concerning Israel in the days of Uzziah king of Judah, and in the days of Jeroboam the son of Joash, king of Israel, two years before the earthquake” (Amos 1:1). This opening line suggests that Amos received some sort of vision and then put it into words.

There is a meticulous literary structure to the book that has all the qualities of Divine inspiration. This intricate structure is surprising since Amos describes himself as “no prophet or son of a prophet,” but as a, “sheepbreeder and tender of sycamore fruit” (Amos 7:14-15). For a mere shepherd then, Amos has crafted a masterpiece of rhetorical skill as he was “moved by the Holy Spirit” (2 Peter 1:21).

There is a typical sevenfold chiastic structure to this book with the central D section being a call to repentance. This is similar to the book of Joel (which comes before Amos) but in expanded form. You will notice in the opening oracles this refrain, “For three transgressions of [insert nation] and for four, I will not turn away its punishment.” Of course, 3 + 4 = 7, and this creates a certain rhythm and cadence to the book that Amos employs to point the finger at Israel. The book begins with seven oracles against Israel’s seven neighbors: Damascus, Gaza, Tyre, Edom, Ammon, Moab, and Judah. Since seven is the number of completion, we would expect this to be the end of the oracle, but Amos continues and adds Israel as an eighth nation to be judged, “For three transgressions of Israel, and for four, I will not turn away its punishment” (Amos 2:6), and then Israel is given a longer oracle of judgment than all the previous ones. This is just one example of the many sevenfold patterns that help reinforce the message of this book: judgment is coming upon the world, so seek the Lord and live!

David Dorsey notes that there are 23 sevenfold groups in Amos:

Amos 1:1 gives us a general timestamp for his vision which places him in the overlapping years of King Uzziah’s reign in Judah and Jeroboam II in Israel (c. 8th century BC). He also adds that this was two years before the earthquake. This seems to indicate that the composition of the actual book took place after the earthquake, although his vision and preaching came two years before it. Earthquakes are associated with God’s coming in judgment to shake the nations, and the first oracle indicates that God’s roaring voice is a harbinger of the shaking that is to come,

“The Lord roars from Zion,
And utters His voice from Jerusalem;
The pastures of the shepherds mourn,
And the top of Carmel withers.”
(Amos 1:2)

In the days of Amos, Israel was prosperous, but as we will discover later in this book, their prosperity had come at the expense of the poor and through grievous injustice. In chapters 4 and 5, Amos chastises the wealthy for their decadent, self-indulgent lifestyles. He even calls the women of Samaria “cows of Bashan…who say to your husbands, ‘bring wine let us drink’” (Amos 4:1). This middle section of the book is an indictment against their religious worship that is not offered to God, but unto idols. The consequences of their apostasy meant bringing God’s covenant curses down upon their heads.

The Five Levels of Judgment

In Leviticus 26, we are given the blessings and curses of the Mosaic covenant. If Israel kept the commandments and obeyed God, He would give them fruitful crops, an abundance of wine, peace in the land, and dwell among them (Lev. 26:1-13). But if they disobeyed, there would be curses that escalated until they repented. There are five levels of judgment in Leviticus 26 and Amos picks up on these to remind Israel that God is keeping His word. The one comfort in these curses is that they end with a promise, that if Israel confesses their “iniquity and the iniquity of their fathers, with their unfaithfulness in which they were unfaithful to Me, and that they also have walked contrary to Me, and that I also have walked contrary to them and have brought them into the land of their enemies; if their uncircumcised hearts are humbled, and they accept their guilt—then I will remember My covenant with Jacob, and My covenant with Isaac and My covenant with Abraham I will remember; I will remember the land” (Lev. 26:40-42).

It is this covenant promise with all its blessing and curses that allows Amos to tell the house of Israel on behalf of God, “Seek Me and Live” (Amos 5:4), “Seek the LORD and live” (Amos 5:6). Israel did not repent, and thus the Level 5 judgment was carried out. They were conquered by Assyria, cast into exile, but eventually God would restore them.

The Five Levels of Judgment in Leviticus 26:

The Tabernacle of David

Amos ends with a promise that one day, God will raise up and rebuild the tabernacle of David which has fallen down (Amos 9:11-15). This section of Amos becomes a crucial passage in settling early church debates over Jew-Gentile relations. James cites Amos 9:11-12 at the Jerusalem Council in Acts 15, as he argues that the Gentiles do not need to be circumcised to be saved. This citation also tells us that the apostles saw their ministry as part of the fulfillment of Amos’ prophesy, their preaching to the Gentiles was how God was rebuilding the tabernacle of David.

Now this is where it gets interesting. What was the tabernacle of David in the first place? A lot of commentators just say this refers to the Davidic dynasty, but that’s not what is primarily in view here. The original tabernacle of David appears in 1 Chronicles 15-16, and it is a tent that David erected to house the ark of the covenant. And if you remember, they had tried to move the ark before, but they neglected to carry it according to the law in Numbers 4, and so Uzzah was struck dead when the ox stumbled, and he reached out to touch it. So David decided to leave the ark in the house of Obed-Edom the Gittite (a Gentile!?) and it stayed there for three months. Once it was clear that God had blessed Obed-Edom’s house, David then moved it to the City of David, that is Zion/Jerusalem (2 Samuel 6), but this tent in Jerusalem was a different tent than the tabernacle of the Lord where all the daily sacrifices and offerings were made by the Levites. That tent was still at Gibeon about 10 miles away (1 Chron. 21:29, 2 Chron. 1:3). So you have this unique situation where the ark of the covenant that used to be in the tabernacle of the Lord in the holy of holies, is now all by itself in the tabernacle of David. There are two tabernacles at this point in history. David then appoints Asaph and his brothers to minister before the ark every day with music and singing. And this is a new thing in the history of Israel. You have musical worship before the ark in Zion, and animal sacrifices at the tent in Gibeon. After Solomon builds the temple on Mount Moriah (2 Chron. 3:1), he brings the ark from Zion, and the holy furnishings from the tabernacle in Gibeon, and they are both reunited in the temple.

So the tabernacle of David was a place of musical worship, and Obed-Edom (literally: servant of Edom) served there. Now if we look at Amos 9:11-12, it says that God is going to rebuild this tabernacle of David, this place of musical worship before his throne (ark), “that they may possess the remnant of Edom, and all the Gentiles who are called by my name.” Now the next book after Amos is Obadiah, which is an oracle of judgment against Edom foretelling their destruction. But there is a remnant of Edom who is going to be saved, just like the original Obed-Edom served at the original tabernacle of David. Now when James quotes this passage in Acts 15, he interprets/translates it this way: “so that the rest of mankind may seek the LORD.” James changes Edom to mankind in his quotation. In Hebrew the word Edom (אֱדוֹם֙) is a variation of the word Adam (אָדָ֛ם) but with different vowels, so there is some wordplay going on here.

Bringing this all together, James appears to be interpreting Amos 9:11-12 as a prophecy that the New Testament church, composed of Jew and Gentile, is patterned not after the temple or tabernacle of Moses, but after the tabernacle of David. In other words, if Obed-Edom had priestly status to minister before the ark of the covenant, then all of mankind (all of the Gentiles) should be included in new covenant worship. If there was no circumcision barrier at the tabernacle of David, then why should there be that barrier now that Christ the son of David has come?

11 “On that day I will raise up
The tabernacle of David, which has fallen down,
And repair its damages;
I will raise up its ruins,
And rebuild it as in the days of old;
12 That they may possess the remnant of Edom,
And all the Gentiles who are called by My name,”
Says the Lord who does this thing.

16 ‘After this I will return
And will rebuild the tabernacle of David, which has fallen down;
I will rebuild its ruins,
And I will set it up;
17 So that the rest of mankind may seek the Lord,
Even all the Gentiles who are called by My name,
Says the Lord who does all these things.’